What is NLG and how does it work with the Natural Language Process (NLP)? NLG is a type of AI and language translation technology that is becoming more prominent in business platforms.

NLG standards for Natural Language Generation and it is changing the way we interact with machines and the way businesses gather data. What is NLG exactly, and what makes it different from other technologies? With the compound annual growth rate of the NLG market expected to reach 1.6 billion dollars by 2027, you need to know about NLG. A chatbot, which is often used for FAQ portions of websites and customer support, is one type of NLG. – Photo by mohamed_hassan on Pixabay

NLG is a type of AI that automatically processes data into sentences and stories, in either written or narrative form, in a way that’s easy for us humans to understand. The NLG can take massive amounts of data from pre-set templates to form a sentence, reply, or inquiry that reads like a natural human conversation. This data and our inputted responses to this data create and add to a database of information that businesses and researchers can use to improve a process or product.

When is NLG used? Any time you beckon Alexa or Siri, an NLG has been used to create that product and experience – Photo by Anete Lusina from Pexels

NLG is being used for a vast array of applications, and chances are that you’re already encountering and engaging with this technology daily. Here are a few broad ways that both businesses and consumers use NLG, NLP is a series of Ais that work in a relationship with a user to create and exchange of information that benefits the user and the business.. – Photo by geralt on Pixabay

NLP is a blanket term that refers to NLG and Natural Language Understanding (NLU). NLP is a framework that converts unstructured data to structured data. NLU is the ability of a machine to use syntactic and semantic analysis to gather meaning from a piece of text or speech. It is the NLG that allows devices to create content from the NLU data content. In short, NLU lets a computer understand what data the user is giving it. At the same time, NLG provides data back to the user from the computer in a way the user can understand, thus the Natural Language Process.

Making an NLG requires several steps and a substantial amount of NLU data to create content that resonates and sounds natural. Whether it’s a chatbot or a machine translation tool, these are some of the steps and considerations that go into making an NLG,

The Future of NLG NLG is used in a variety of apps and processes on our phones. – Photo by Ketut Subiyanto from Pexels

NLG has created ways for businesses to communicate data efficiently and effectively, which increases productivity and reduces business costs. It presents data and information in an accessible manner while collecting big data that will lead to specific insights into a business. NLG has been used in different business industries, from insurance, retail, finance, media, eLearning platforms, eCommerce and eCommerce translation, manufacturing, translation management and more.

While technology has come a long way, NLG is still limited compared to real human writing and semantics. NLG can only act on the NLU data, which, currently, doesn’t stack up to the ingenuity of human writing and content, which makes the quality of NLG content one of its biggest weak points. NLG, however, is not without its merit as the NLP is superb at generating human insights from big data, especially at a volume that we, as humans, are not capable of producing. As NLG can be used in various markets, it is a valuable tool that can be used in many ways for any business. Take translation and localization, for example.

For businesses that want translation and localization services to expand into other global markets, NLG is an important part of a quality translation. Translators use machines to help expedite the translation process and fine-tune it with their human expertise. This process is called machine translation post-editing. 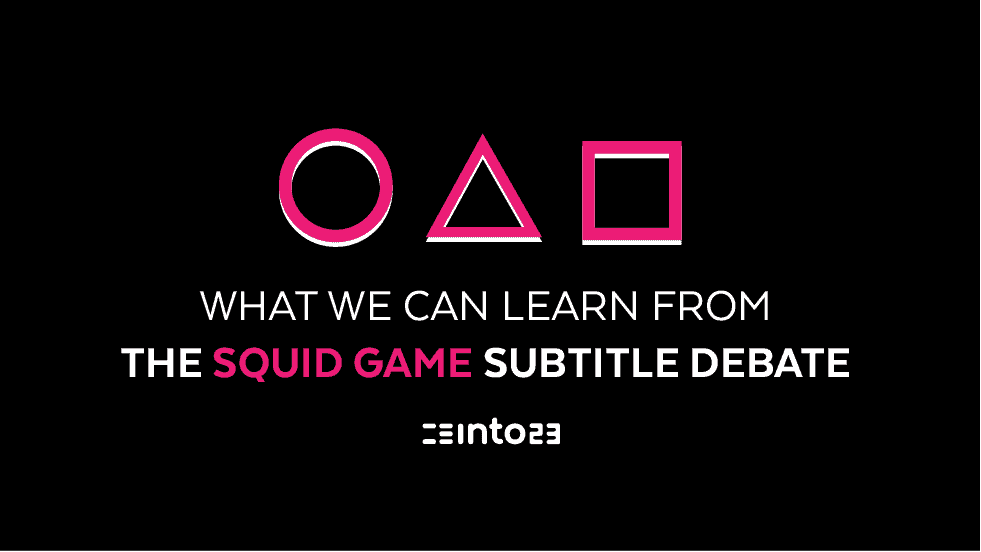 Phenomenal runaway South Korean hit Squid Game, streaming via Netflix, was in one regard panned: For many viewers, the subtitle translations obscured the original content’s meaning. Criticism centred on the subtitles not conveying the complexity and nuances of the brilliantly written script.

The errors are so bad, according to observers, that the English subtitled version and the Korea are completely different films in terms of not only dialogue, but meaning and character development.

For the uninitiated, Squid Game follows struggling South Koreans who do battle to escape the drudgery of their existence by winning a huge cash prize in a bloody series of games in which the penalty of losing is death.

(The script by director-writer Hwang Dong-hyuk had been rejected by movie companies on numerous occasions over the course of a decade, before it was made.)

One American Korean-speaking viewer, put their finger on the frustration this caused fans of the show. “Not to sound snobby, but I’m fluent in Korean and I watched Squid Game with English subtitles and if you don’t understand Korean, you didn’t really watch the same show,’ she tweeted. ‘Translation was so bad. The dialogue was written so well and zero of it was preserved,” she was reported by Elle as tweeting.

How bad was it, really?

Because of the changes of meaning in the subtitles, some of the characters came across as very different from that originally envisioned by the filmmaker, who is releasing three of his films the streaming platform.

The intensity of the situation contestants found themselves in was somewhat marred by the soft expletives they used whilst battling to the bitter end. In the original Korean, the language is far more gritty, as would befit such a hellish scenario. One aspect of Korean that was wholly lost in translation was the use of honorifics. In many East Asian languages, honorifics are important parts of communication between people of different generations. They convey rich meaning about social relations, which was lost in the subtitles.

These honorific comprise words like verb forms and pronouns that reflect and recognise the speakers’ social hierarchical status. There are certain pronouns that a younger speaker would use to address an older speaker. ‘Older brother’ is commonly used by a younger make when referring to an older man. It indicates a degree of closeness and fondness, but this was lost in the translation.

Another instance is when Pakistani shop worker Ali meets company chief Sang Woo. At first, Ali addresses Sang Woo with the moniker, Mr Company President. As their relationship deepens in the face of extreme adversity, Sang Woo bids Ali call him, hung, or big brother, instead.

This affects the way a scene where Sang Woo betrays Ali, as the English translation was ‘call me Sang Woo,” which is not as poignant. The intimacy conveyed by the big brother moniker powerfully conveys the exploitation and selfishness of humans in general. Lastly, the lead film’s entire meaning was warped through the subtitle translations.

There are two English subtitles, one of which is closed captioning, has fewer errors. Closed captions display more than just what’s said, they convey other aspects of the visual display. It’s used for when the sound is unavailable or can’t be understood. The other version comprises a transcription of the dubbed version.

What is subtitling? (Subtitles, closed captions and dubbing)

To understand where it went wrong and how you can get it right first time, it’s necessary to understand the subtitling process and its limitations.

Subtitling falls between translation and interpretation and requires video transcription services with a specific set of skills, including the ability to condense dialogue into a set parameter – the on-screen closed caption space – whether the dialogue is intensely complex, or incredibly simple. Expert subtitles must be totally up-to-date with changes in vernacular language as much television content features everyday language, often spoken by young people, who are on the cutting edge of changes to language.

Just as a dubbing studio would have a dubbing artist, audio and video transcription services include highly honed subtitle experts. A good subtitle translator is hard to find, so do your due diligence. A good subtitling agency will be able provide premium subtitling services that are fit for an international hit. When consider a dubbing and subtitling services company, make sure to look at the reviews of existing customers, and assess the level of content they have produced before. Many companies will provide audio transcription services, voice dubbing and video translation services under one roof.

Translating phrases in a way that takes the same amount of time to say the same thing in two languages is incredibly challenging. Copying actors’ mouth movements is important as it increases the feeling of authenticity and audience engagement. There is a fine balance between matching the actors’ mouth movements and staying true to the actual words.

The language pair being translated also has a bearing on subtitle challenges. For example, when translating from Korea to Japanese, as the latter language also uses a similar set of honorifics, then it’s easier to convey the precise meaning of the original.

But with a language pair like Arabic and Korean, the difference is going to be much greater. One reason for this is a language’s compactness. This refers to the number of words used to express a thought. Some languages have single words to explain a thought or action, for example, whereas others will use several words. Another way to put, is that a compact is a more efficient language.

Writing in The Atlantic, John McWhorter postulates that the least efficient language is Kabardian, which is spoken in the Caucasus. He notes that in the simple sentence “The men saw me,” the word for “saw” is sǝq’ayǝƛaaɣwǝaɣhaś (pronounced roughly “suck-a-LAGH-a-HESH”).

Why is it becoming more important?

Global audiences are becoming more comfortable with watching content in foreign languages with subtitles. Indeed, many of Netflix’s top hits are foreign language series like Borgen and Call My Agent. Foreign content is also becoming increasingly accessible. If you want to increase your content’s audience, then expert subtitling is the way to go. Contact us today to explore your options.